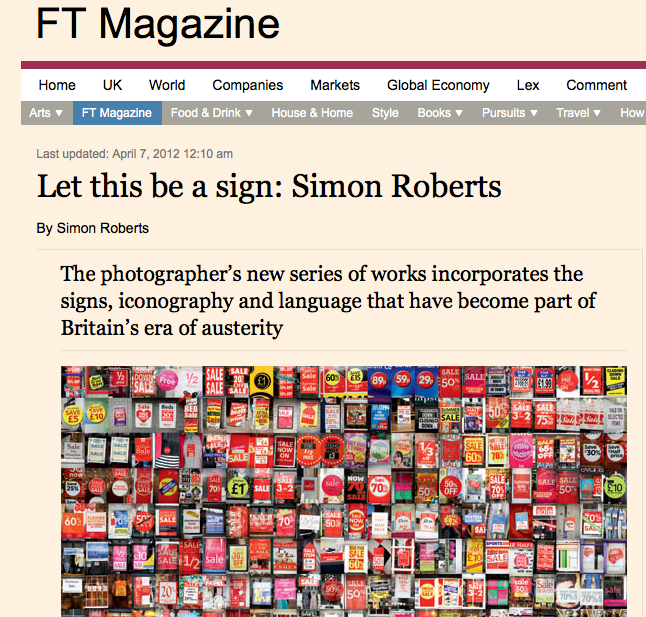 My new series of work ‘Let this be a sign’ is published in today’s FT Weekend Magazine. It incorporates the signs, iconography and language that have become part of Britain’s era of austerity.

One of the ways we remember an economic crisis is through its images. When we think of the Great Depression in America we think of black-and-white ­portraits of men in bread lines wearing placards that beg for work. When we remember Thatcher’s Britain we see news pictures of the miners’ strike or stolen moments from the inside of dole offices. While barely a day goes by without more grim economic news, the current recession has been less visually memorable, perhaps because the outward signs of today’s economic pain are hard to capture without resorting to cliché, even though the eventual effects of such news – a lost job, a vanishing pension, cutbacks to social services – are intensely personal and painful. Over the past 12 months I’ve been looking at different ways of representing these effects. I started with the series “Star Chambers”, published in the FT Weekend Magazine in April 2011. These were photographs taken inside city halls around the country, where annual budgets were agreed and major cuts signed off. But as the situation has moved on, I have employed video, text, objects such as protest banners, as well as photographs, in an attempt to record our new predicament and its shifting economic and political geography.

The crisis has moved terminology and jargon from the business pages on to the front pages of our newspapers, radios and TV sets; these words have become part of our everyday language. Arranged alphabetically, they highlight the fog of rhetoric, hyperbole and exotic, sometimes contradictory terms used by politicians, economists, protesters and journalists to describe the effects of the credit crunch. I collated the text from political speeches, papers from the governor of the Bank of England, newspaper headlines, protest poster slogans and economic reports, all of which reference the economic situation from 2007 to 2012. Against this lexicon I traced the downward graph of ­consumer confidence during the same period.

The UK high street has been one of the major casualties of the credit crunch, with a recorded dive in consumer spending leaving a wake of failed shops and brands. Sale signs are now omnipresent in shop windows, desperate to entice us with bright colours, shouty promises and seemingly massive price reductions. But while some shopfronts are shuttered for good, discount stores are enjoying a booming trade – known as “the Aldi Effect”.

The increase in demonstrations, student sit-ins and union strikes has seen a plethora of home-made, low-tech protest signs – ironic given the ways movements such as UK Uncut use social media to rally their followers. Compared to the angry slogans of the 1970s, the tone of these placards is quite gentle, with an underlying element of humour.

The Occupy London movement almost became an art installation in itself. Between mid-October and late February, the encampment outside St Paul’s Cathedral focused the protest against corporate greed and briefly became part of the local landscape. The montage opposite uses some of the hand-crafted notes, messages and signs posted up around the cathedral and Paternoster Square before the camp was closed down at the end of February.

What isn’t clear is how much difference the protests will make. As

the new financial year unfolds, and recovery is even slower than predicted, there is no guarantee that the fiscal landscape will improve. In this sense, my work is unresolved. The installation is ongoing, mutable and subject to all of our fears and desires.

A photo-montage of the notices and messages posted by the Occupy London protesters around St Paul’s, between October 2011 and February 2012; “the [Occupy] movement almost became an art installation in itself.”
“Let This Be a Sign”, works by Simon Roberts, will be exhibited at the Swiss Cottage Gallery as part of the London Festival of Photography from May 23 to June 30; www.simoncroberts.com.