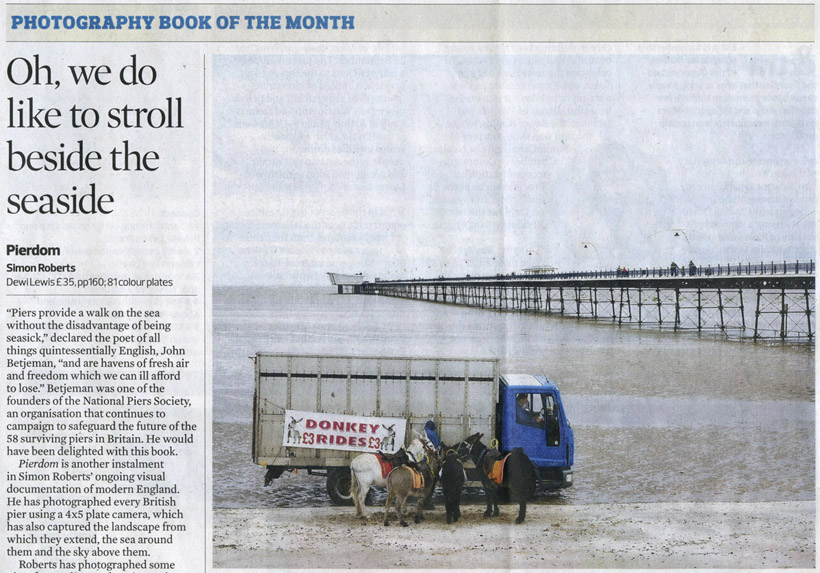 O’Hagan’s Photography Book Of The Month

Pierdom is Sean O’Hagan’s ‘Photography Book of the Month’ and reviewed in today’s Observer:

“Piers provide a walk on the sea without the disadvantage of being seasick,” declared the poet of all things quintessentially English, John Betjeman, “and are havens of fresh air and freedom which we can ill afford to lose.” Betjeman was one of the founders of the National Piers Society, an organisation that continues to campaign to safeguard the future of the 58 surviving piers in Britain. He would have been delighted with this book.

Pierdom is another instalment in Simon Roberts‘ ongoing visual documentation of modern England. He has photographed every British pier using a 4×5 plate camera, which has also captured the landscape from which they extend, the sea around them and the sky above them.

Roberts has photographed some piers from a distant elevation and others up close from underneath their steel and wood structures. Thus, Deal pier in Kent seem to stretch to the horizon, while Aberystwyth looks like an industrial sculpture. Others, like the “lost” pier of Brighton West or Hastings pier, both greatly damaged by fire, seem like malformed things that may at any moment fall into the sea. (As I write, work has begun on the reconstruction of Hastings pier, but Brighton’s West pier remains lost, though there are ambitious plans to build a towering pier in the sky at its entrance. This does not seem right, somehow.)

Like his previous book, We English, Pierdom is a kind of topography of England and Englishness. There is a similar sense of stillness in many of the large-format landscapes, as well as a sense of the abiding otherness of the English seaside town. Blackpool now looks much like Blackpool then, or is it just the almost Kodachrome colours that make the ornate entrance look oddly old-fashioned? Sandown Culver pier on the Isle of Wight is a different kind of study in muted colour and atmosphere, with a hint of silver sunlight on the horizon where the grey of the sea meets the lighter grey of the sky.

This is a much cooler and detached approach than, say, Martin Parr’s seaside photographs, and shares a certain similarity of style with John Davies‘s documentary photographs of British landscapes. Here and there, though, there are hints of John Hinde’s postcard vision of Britain as one big unreal leisure theme park, especially in Roberts’ wonderful diptych of Walton-on-the-Naze pier.

A homage, then, to the enduring vision of the Victorian pier designers, but also to an England that still values the bracing benefits of “a walk on the sea without the disadvantage of being seasick”. And a very beautiful book from a master of stillness, light and landscape.

You can download a pdf of the review here.