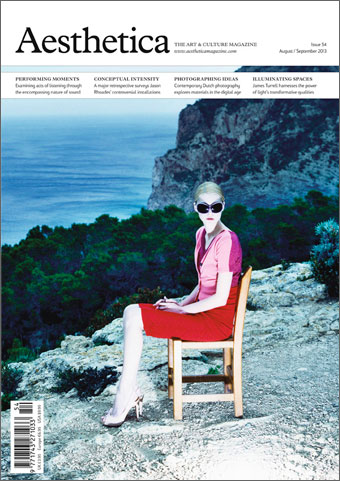 The current issue of Aesthetica Magazine (Issue 54, August – September 2013) features a review of Pierdom under the title ‘Iconic Britain”:

“Roberts’ new exhibition and book of the same name, Pierdom, capture the nostalgia and the altering function of piers….

Acknowledging their importance over time, Roberts compares the original architecture structures with their modern interpretation and usage. For example, his images of abandoned piers such as Birnbeck Pier (2012) are contrasted with those like Ryde Pier (2012), in which the local community and everyday function of the landscape are represented by a skateboarding park that appears at the forefront of the picture. It was this combination of culture and society that caught the photographer’s interest, discovering an ingrained fascination with the relationship between humanity, the surrounding environment and important British pastimes.

Roberts records the symbolic constructs with great technical precision. His images capture peripheral details, which include the surrounding landscape and have the effect of enriching the observation of each work. Utilising formal devices associated with the picturesque, the pieces align audiences with contemporary issues, acknowledging the precarious connection between society, nature and urban environments. Through deciding to survey a small part of British history and Landscape, he is able to undertake an architectural and anthropological study of the country.”