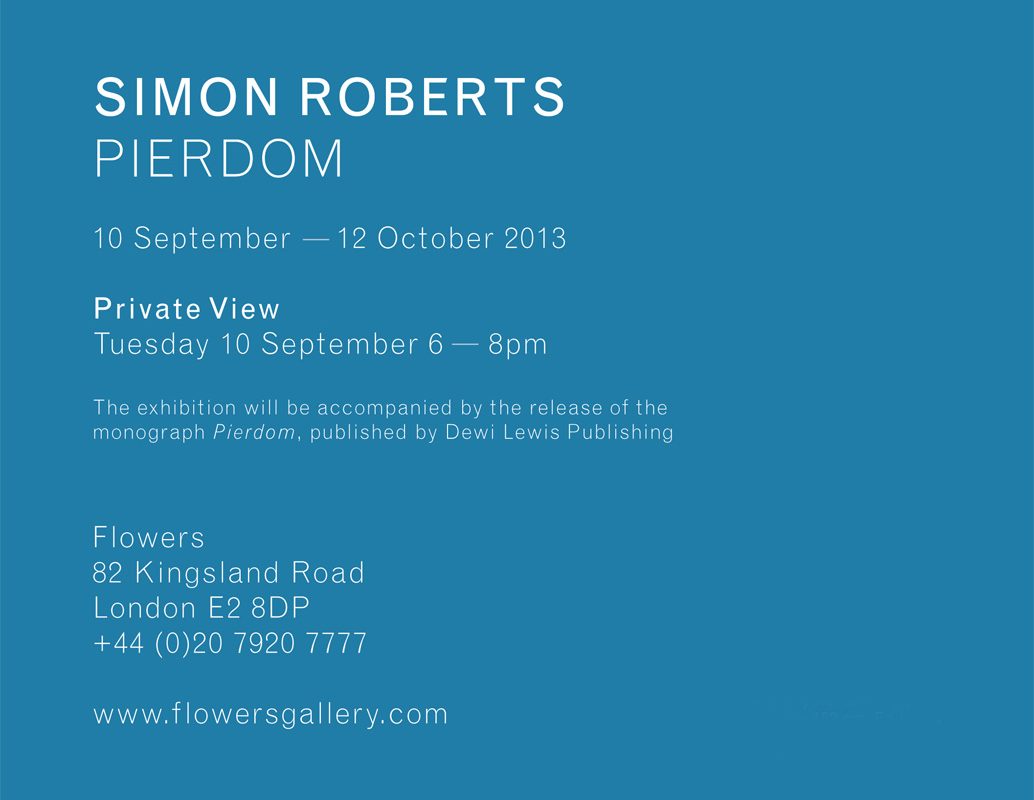 My second solo exhibition at Flowers Gallery in London will be Pierdom, opening on 10th September. An associated book, published by Dewi Lewis Publishing, will be launched on the same night.

British photographer Simon Roberts has spent the past three years creating Pierdom, a comprehensive survey of Britain’s piers. Predominantly constructed during the 19th Century in the context of expanding Victorian seaside resorts and railways, these structures were often erected as landing docks for pleasure steamers and other sea craft. Growing to accommodate the needs of day-trippers escaping the smog of the city, engineers began to incorporate bandstands, cafes and music halls into their designs, embracing the growing notion of ‘pleasure seeking’ by the seaside.

Pierdom addresses the historical significance of these architectural structures placed in comparison with their modern interpretation and functionality. Roberts’ photographs of ruinous piers such as Birnbeck Pier (2012) are in contrast with those such as Ryde Pier (2012) in which the local community and everyday usage of the landscape is represented by a skate boarding park which dominates the composition. It is this socio-cultural element of the landscape that has sustained Roberts’ interest, revealing a deep fascination with the way humans interact with their environment, and in eccentric British pastimes.

At the turn of the century the British coastline boasted over 100 piers, some modest and functional, others elegant, exotic Victorian structures thrusting out into the sea. Now under half remain, the others destroyed by fierce weather and fires, with many dismantled during the 2nd World War to prevent German landings. Britain’s piers have become cultural landmarks, tracing history, national identity and economic fortunes from Victorian industrialism to the post-war boom, and finally now to the recent economic downturn.

Roberts’ large format photographs are taken with great technical precision, often from elevated positions encorporating peripheral details and the elements, thus enriching the viewing experience of each print. Through formal devices associated with the picturesque; perspective, asymmetry and juxtaposition, the photographs engage us with contemporary issues about our uneasy and fragile relationship to both nature, and our urban environments.The series is at once factual yet warm, a broad architectural and anthropological study of our coastline as a microcosm of British society.