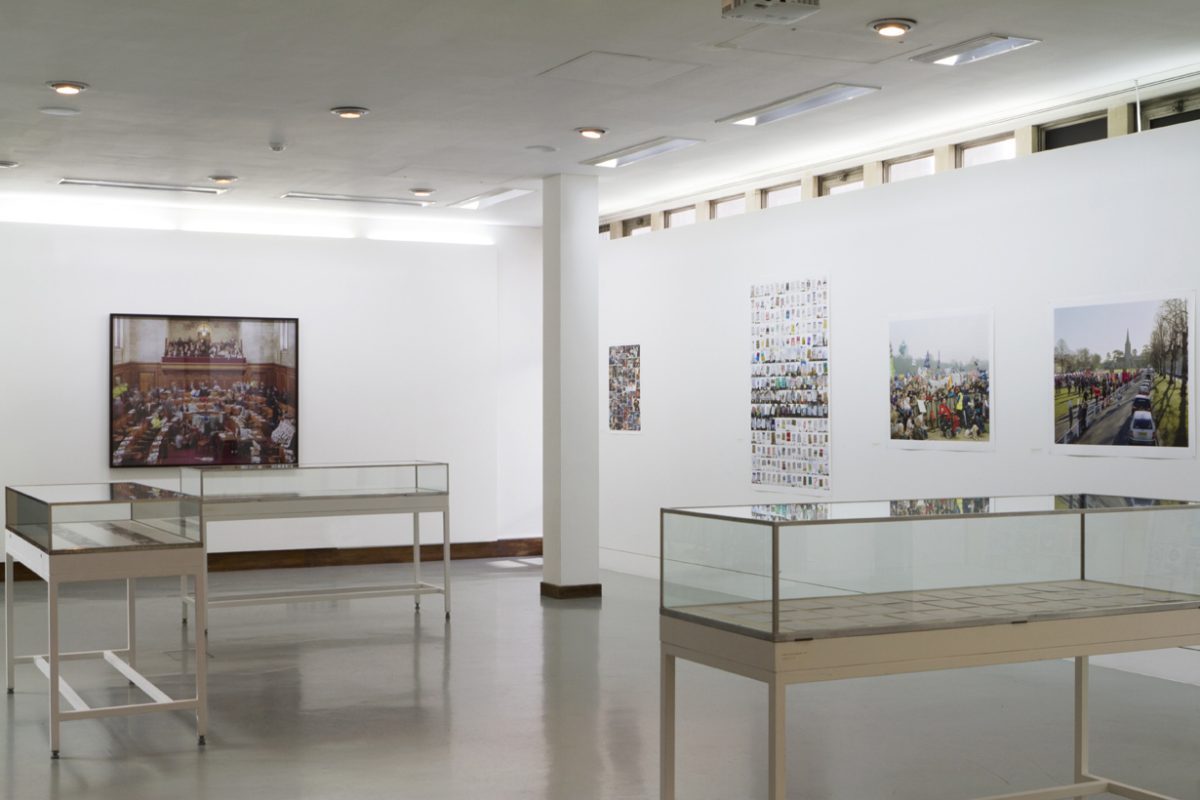 I am exhibiting a new body of work as part of the London Festival of Photography running throughout June. Let This Be A Sign is on show at the Swiss Cottage Gallery and explores the economic, political and social effects of the recent UK recession.

Here are some installation shots- Alongside the exhibition, a participatory space has been set up where visitors are invited to share their thoughts and experiences. Why not get involved?

If you would like the opportunity to share your experiences of the recession and its effects, you can leave a message on the Public Wall in the gallery, or via twitter using the hashtag #LetThisBeASign. Here is the exhibition text:

One of the ways we remember an economic crisis is through its images. When we recall Depression-era America, we think of the black-and-white portraits of men in bread lines wearing placards that beg for work. Recalling Thatcher’s Britain, we see news pictures of the miners’ strike or stolen moments from the inside of dole offices. While barely a day goes by without more grim economic news, the current recession has been largely invisible, perhaps due to the challenges of representing abstract monetary systems or because the outward signs of today’s economic struggles are hard to capture without resorting to cliché, even though the eventual effects – a lost job, a vanishing pension, cut backs to social services – are intensely personal and painful.

Over the past eighteen months Simon Roberts, who was commissioned as the official Election Artist by the House of Commons in 2010, has attempted to cut through the statistics and abstractions to explore different ways of representing the effects of these changes on the landscape. In this new series of work he follows in the humanist tradition – employed by some of the most influential British documentary photographers of the last century – whilst incorporating the signs, iconography and language that have become so much a part of this ‘era of austerity’.

His approach is multi-disciplinary, using video, text and objects such as protest banners, as well as digital collages, in an attempt to record our new predicament. The Credit Crunch Lexicon, for example, is a text-based work, which draws upon the diversity of economic, political and philosophical terminology that has now become part of our vernacular.  Arranged alphabetically to create a form of concrete poetry, the words and phrases scrutinize the miasma of rhetoric, hyperbole and, sometimes contradictory terms used to describe the credit crunch. In other pieces Roberts captures the more visible manifestations of economic change, from the omnipresent sales signs in shop windows and shuttered high street stores to the increase in union strikes, student sit-ins and the manifestation of the Occupy encampments which focused its protest against corporate greed.  There are photographs, too, taken inside city halls around the country, where the 2011/12 annual budgets were agreed and major cuts signed off.

This exhibition aims to convey a multitude of voices and provide an incisive depiction of contemporary British reality. Our means of organising protests and campaigns may have become more technologically sophisticated, but our means of self-expression: camps, banners, graffiti remains straightforward, rooted as they are in our personal experience, our sense of justice, our vulnerability and our expectations of those in positions of power.

As is common in his practice, Roberts has added a collaborative element to this exhibition encouraging public participation.

As the new financial year progresses with continued chaos in the Eurozone and recovery slower than predicted, there is no guarantee that the fiscal landscape will improve. In this sense, Roberts’ work is unresolved. The installation is ongoing, mutable and subject to all of our fears and desires.

A colour newspaper, conceived and published by Roberts, will be available during the exhibition.