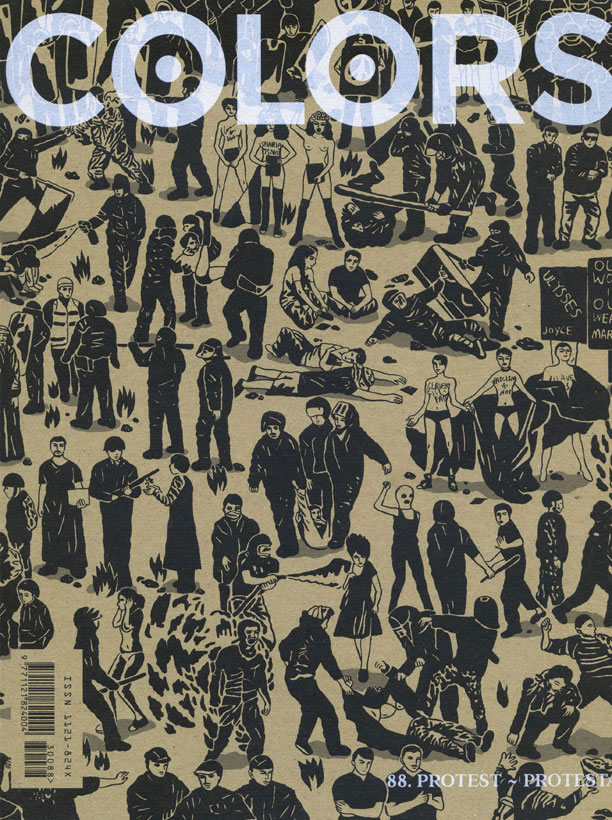 The current edition of Colors Magazine, Issue 88 themed Protest, has published a series of my work from Let This Be A Sign, including a gate-fold of my protest poster photographs (see below).

You can buy the magazine online here.

Over the past three years, people in more than 80 countries across the world have taken to the streets to protest

against their governments. But only in six of the above countries did governments finally fall.

COLORS 88 – Protest tells stories of how protests start, spread, triumph, are repressed and sometimes become revolutions. From South Korea’s anti-uprising volunteer corps to female drivers in Saudi Arabia; from Mexico’s labor rights superheroes to fully-armed guns rights demonstrators in the United States; from the pigs left to roam the main square of Nairobi, Kenya, to Palestinians dressing like blue aliens from Hollywood film Avatar, we’ve interviewed, photographed, and illustrated popular uprising across the world. Plus, Occupy, Tahrir, FEMEN sextremists and a series of illustrated DIY protest techniques and strategies: how to use a mattress as a shield, chain yourself to a tree, and hold your breath until it’s all over.