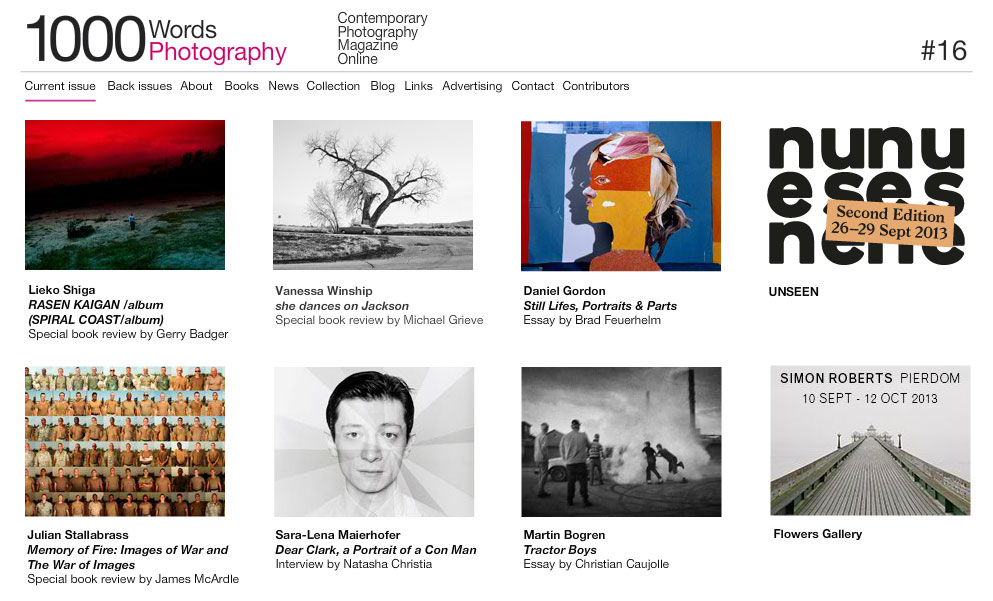 “To kick off this Autumn edition we meet young, German photographer Sara-Lena Maeirhofer. Speaking here to Natasha Christia, she discusses Dear Clark, a Portrait of a Con Man, a fascinating project that uses photography to explore the possibilities of fiction in its narration of real-life imposter Christian Karl Gerhartsreiter, who called himself Clark Rockefeller, having developed an identity as a scion of the wealthy family.

Photography critic Gerry Badger reviews Lieko Shiga’s gloomy yet poetic photobook, SPIRAL COAST/album, shot in the Kitakama region of Japan, the area badly hit by the earthquake and tsunami of 2011.

Michael Grieve brings us an essay on the latest photobook by British photographer Vanessa Winship, she dances on Jackson, records of her road trip across the US produced during a time of grieving.

Brad between photography, sculpture and painting.

James McArdle deconstructs the Photoworks publication, Memory of Fire: Images of War and The War of Images, edited by Julian Stallabrass, a timely assessment of the urgent issues relating to imaging war, the changing role of documentary photography and the enforced agenda of media networking that invariably invokes amnesia.

Swedish photographer Martin Bogren is profiled in our sixth and final feature, with a particular focus on Tractor Boys, which documents a strange ritual-mating dance wherein youngsters meet up in rural areas of Sweden to race their ‘tractorcars’, burning tyre marks into the asphalt. An essay accompanies the portfolio here from the legendary Christian Caujolle, republished with the kind permission of Dewi Lewis.

Over in our dedicated Books section, Sean Stoker leafs through Pedro Costa’s Casa de Lava, a scrapbook filled with ephemera following the Portuguese filmmaker’s trip to Cape Verde in 1992; Brad Feuerhelm gets vertigo as he stares down at Eric Stephanian’s devastating but beautiful Lucas, a self-published zine comprising one single photograph of the photographer’s son, taken on the only opportunity he was given to meet him; while Oliver Whitehead considers the more clinical but nonetheless intriguing new book from Clare Strand entitled Skirts.”